The Circus is Coming to Town!

How we began:
Lumpy Circus is the brainchild of two women who like to create costumes, dance, sing and do gymnastics: elementary school art instructor Ilah Reynar, and Joanna Helmuth, former owner of Starflower Dance Company. Joanne and Ilah Reynar conceived the idea of a kids’ circus camp in the Spring of 2013. That summer, Robert Burkhardt joined Joanne and Ilah to shape the Lumpy Circus with twenty 4-13 year olds during a two-week workshop, culminating in a forty-five minute “show” set to recorded music and performed for parents.
​
By the summer of 2018 The World Famous Lumpy Circus enrolled almost forty “Lumpies,” and held two weeks of rehearsals in Estes Park’s new Community Center, followed by an hour-long show at Performance Park in front of 200 people, based on “Alice in Wonderland,” accompanied by a six-piece band with Karolee McLaughlin as music director, and featuring young Lumpies playing in the band as well as singing. A stunning opening dance number was one highlight of the 2018 production.

In prior years the circus rehearsed at the Stanley Hotel (twice) and Eagle Rock School. Previous show themes included “The Wizard of Oz,” an international theme visiting numerous countries, a Disney circus, a “Circus” circus, and a young girl’s dream of running away with the circus. Summer 2019 will draw on the hit movie “The Greatest Showman” for ideas and music. 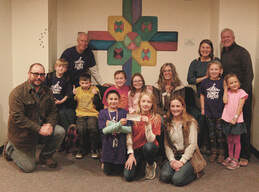 Donation for purchase of Aerial silk & strap rigging provided by the Estes Arts District.
Photo: January 10, 2019 the Estes Arts District Board presents a check
Each year we add to our equipment, e.g.: costumes, slack line, silks, wings, juggling balls, rings and clubs, pogo sticks, hula hoops, and this year, thanks to the Estes Arts District, we are proud to add the aerial silk rigger.
​
We send out a big thank you out to all our volunteers and supporters.
​Lumpy Parents have assisted in making sets and props, delivering mats, making costumes, coordinating transportation, and more. Eagle Rock School has generously provided students as production assistants.